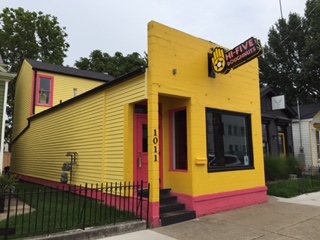 Our family loves doughnuts. We have a tradition that we eat doughnuts on Friday mornings to celebrate the end of the week. Mostly it has been the end of a school week, but since it's summer, it's become the end of a work week instead. And you all know how we feel about local businesses around town! We can't get enough of them, so we set out to find a local doughnut shop and the girls of High Five Doughnuts did not disappoint! Located on E. Main Street in downtown Louisville, the girls of High Five Doughnuts transformed their once food truck operation into our new favorite doughnut shop in town. One of the things that sets them apart from the other bakeries around town is that you have the option to build your own doughnut by choosing the toppings that you would like to put on top. They also have some pretty amazing staples that they've become known for such as a bacon and maple syrup doughnut and a Kentucky Fried Chicken doughnut. Is your mouth watering yet? Our family tried our the maple syrup and bacon combination as well as a doughnut that had fruity pebbles onto. They were both delicious and were still warm. Yum! Those are the best kind! So if you're out and about in Louisville and are searching for a different kind of doughnut, hit up High Five Doughnuts. I promise, you won't be disappointed!