Giving Credit Where Credit is Due: How to build from the ground up

I remember six years ago when Megan and I had just got married. Megan had a credit score of zero. This isn't a good thing, nor is it a bad thing, she was just starting a new chapter in her life.  We were in a furniture store trying to get her a credit card to buy a couch even though we had plenty of money to pay cash for it, we wanted the card just to help her build up her credit.  She got denied for the card!  It was so frustrating, I had just sold a few houses and we could have paid cash for several of those couches but they wouldn't give us a credit card for it.

Getting Started With your Credit:

Coming up here in a few months is College graduation and many students are going to be hitting the work force for the first time in their actual careers.  A couple of years after that, hopefully, they will be calling me to buy their first house!  Typically they will rent a place for six to eighteen months then start looking for a home to call their own, which is normal. It isn't as easy for young people to obtain a loan as it was just a eight years ago. Creditors are getting tighter with what they are requiring, which is making it harder and harder to obtain a loan.

Here are a few good ways to get your credit rolling.

I'm really proud of this new listing I just got, it hit the market yesterday and I have already received three phone calls on it.  The owners put a new roof on it right before it hit the market and it has had upgrades to the windows and a new HVAC system installed in it also.  The house looks great and should sell quick.  I'm holding it open this Saturday just to make sure that it does.  Come Check it out! 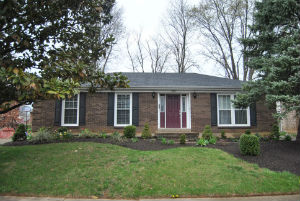